Fortunately many letters and postcards have been preserved by a family member who might be considered a hoarder or a pack rat but to me that person is the keeper of the past for future generations.

History of Taylor Village and Saving Letters For Future Generations

Mum’s goal was to have the Spring housecleaning finished before the end of April.

Gram, Aunt Sadie and Mum worked together to do the wallpapering of the kitchen. Gram sat at the old work table and spread flour and water paste on the back of the strips that Mum and Sadie had measured and cut.

I really liked this wallpaper with the red geraniums and the ivy.

Mum noticed me standing there gazing and immediately came up with a job - which was not unusual.

She said, “Find Cliff and the two of you go upstairs and clean out the old steamer trunk as I want to store the heavy tied quilts in it that I made during the winter.”  “There is not much in it, but if you find anything that looks like it should be saved, put it in the tea box until I have time to look it over.” “There are two or three grey camp blankets that have had their day, so take them to the hay mow in the horse barn as they will make a bed for old Mother-Do and her soon to arrive kittens.”

We were not very happy with the assigned task but that really did not matter to Mum as the job had to be done.

When we took out the old blankets from the trunk, we spotted a chocolate box.  Upon opening it, we found a bunch of letters with some having strange looking stamps.  We each removed one from an envelope and tried to read the tiny writing. Mine was from Gardner, Mass and from what I could make out the writer was Dora, who felt homesick at Christmas time, but doubted the lady she worked for would give her time off to come home on the Boston boat but maybe during the summer.

Cliff’s letter started out with, “Dear Rill, I was counting on coming home for two weeks as I so want to see you and Mama. I am really lonely and miss everyone so much, but the woman I work for says she will need me all summer to look after the children.” By the time Cliff finished reading, I had tears in my eyes and felt so sorry for Dora, who had signed the letter with, “Your loving Sister who thinks of you and home, every minute of the day.”

It would be interesting to know if any children found the letters written by relatives of the Taylor Family back in the 1830s. I certainly enjoyed reading them in the publication, “Taylor Village” by Edith Gillcash that she compiled in 1988.

George Taylor, arrived on the Albion from the Port of Hull on March 7, 1774 and gave his name to this little village. He stated, he left England to seek for better livelihood. In 1780, he married Mary Chapman.

Their son Stephen went to Upper Canada. In a letter to them written in July, 1838, he too expressed a longing to be home but told his parents of the wonderful land. The winter had been mild and they started plowing on March 27. A disturbance had given them an idea to return home but at the same time he tells of all the fruits and vegetables that grow there.

A letter written in 1869 from Sarah Taylor to her son Melbourne is one filled with concern.

Samuel Taylor’s letter in 1869 to his brother Melbourne is filled with information on business and where friends are working.

A sad note - Melbourne Taylor was made captain and in 1872 the ship with all hands was lost in the Atlantic with nothing ever heard of the ship or any of the men.  One of the crew, John W. Dixon wrote a letter to his mother from New York before leaving and enclosed his cheque for fifty dollars and the news he will be going to school on the other side of the Atlantic. The Captain wants him to try for a First Mate certificate.

A few pages from the Log Book of Schooner CAPELLA commanded by Alfred Taylor with Chief Mate being John Cook and Second Mate - David Taylor from June 31, 1869 to Feb 27, 1970 tells of the trials and worries of the weather.

Like the many waves that ripple through the water from the ships, Edith Gillcash’s TAYLOR VILLAGE (1984) gives us ripples of insight into establishing a community and the following of the lives of the families who lived there.

By the way, many a box of letters, stored in the attic or in an old trunk holds gems of genealogical history that are a treasure trove to the family researcher.

Fortunately many letters and postcards have been preserved by a family member who might be considered a hoarder or a pack rat but to me that person is the keeper of the past for future generations. 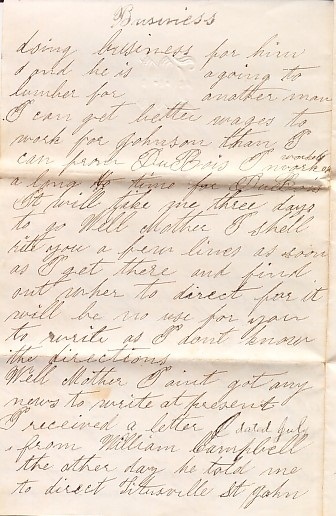 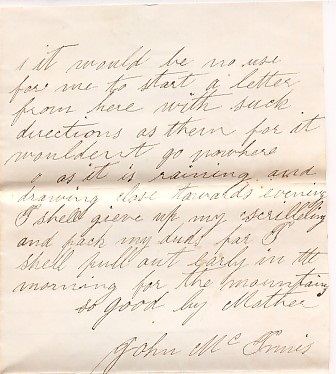 Queries
Query 1830 Crane - Brown: Oliver Crane, born 1803 in New Brunswick attended a wedding in 1823 in St. Mary's, York County as a witness for Amos Crane and his wife Abagail Parsons of Hoyt, New Brunswick. He bought land in Wicklow, Carleton County in 1830 and married Eliz Brown in 1835. They had 12 children. Possibly they lived in Nashwaak or Upper Keswick. Seek documentation on his place of birth and parents plus any information on his relationship to Thomas White and Amos Crane. Contact Doug by email at selectea@nb.sympatico.ca

Query 1831 Thompson - White: Seeking information on Edmund Ernest Thompson born circa 1880, Newcastle, New Brunswick and Jessie E. White born circa 1872 in Richibucto, New Brunswick. She immigrated to the USA in 1897 and died in 1933 in either New Hampshire or Massachusetts. Contact Barbara by email mbtham@aol.com