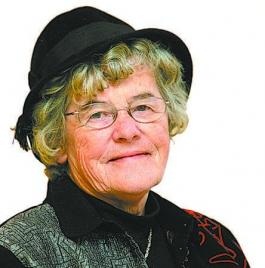 My Beloved Poilus by Agnes Warner

Aunt Ethel thought she was doing us a favour by bringing the outdated clothes she had in her clothes closet. Often Gram or Aunt Tillie would “cut them down” to make outfits for me. Others were made over to fit Mum. In those days wearing “your” colour was never heard of when you were the daughter or wife of a struggling farmer.

Nothing was wasted. The pieces of left over cloth were cut into blocks and used to make quilts and even the buttons were removed.

You might say that Cliff and I were recyclers, as we had the task today of cutting off the buttons and running a thread through the matching buttons and putting them in the button box.

Dad often complained about my clumsiness, so that must have been the reason for my knocking the box off the table with hundreds of buttons rolling across the floor and under the furniture.

I was close to bursting into tears when Cliff suggested we pretend we were on a treasure hunt as we picked up each button. Actually that is what it turned out to be as we found some New Brunswick halfpenny coins and a fish dime.

At this moment Mum came into the room and more or less pretended she did not see the mess but she did comment on the “special” button which she thought was probably from the heavy winter coat, Aunt Nell wore when she was a nurse in the First World War.

Even though Aunt Nell talked of being in the war, it seemed to be of the good times. I never thought about her wearing a heavy coat in the cold winter weather, nor did I think much about the duties of an army nurse until I read "My Beloved Poilus" at http://www.vlib.us/medical/canadian/cnurse.htm a group of letters from a Saint John girl, who was a nurse in World War I.

The writer of these letters, Agnes Louise Warner was the daughter of Nancy Robinson and Darius Bingham Warner. She was a graduate of McGill University, and the Presbyterian Hospital, New York.

During the United States Civil War, Agnes's father served in the Union Army as a Lieutenant Colonel, Colonel and Brevet General (successively). He was seriously wounded in the Battle of Kennesaw Mountain, resulting in the loss of an arm. In May 1866, he was appointed U.S. Consul in Saint John, New Brunswick, and moved to the city with his wife later that year. Darius held the position of Consul until 1885, when he assumed a partnership in the sawmill and lumber business of his brother J. R. Warner & Co.

“He was warmly remembered as "the man of the hour" following the disastrous fire that swept Saint John in 1877. Telegraphing the news to sources all over the United States, he prompted "instantaneous and hearty response from many quarters," then applied his military experience to the skilful coordination of relief operations. Thirty-seven years later, his daughter Agnes, would embrace this same spirit of responsibility in the face of international crisis.”

It was not Agnes’s intention to be an “Angel of Mercy” as one of Canada’s Nursing Sisters in World War I. It just so happened that she was travelling in 1914 in the south of France, possibly as a private duty nurse, with the household of New York Banker, Roswell Eldridge, when the war broke out. At once she received permission to give hospital assistance at Divonne-Les-Bains, France, near the Swiss border and immediately began volunteering to help the Red Cross.

While she was engaged in this work, and without her knowledge, several of her Saint John friends decided to publish her letters from France and Belgium, under the title My Beloved Poilus, "simply and solely to raise money to aid her in her work."

Poilus was an affectionate name for the fighting men in the trenches.

In the preface of the 1917 publication, the Rev. H. A. Cody states, “These letters were not written for publication, but for an intimate circle of relatives and friends.”

The comments in her letters showed her concern for the terrible suffering caused by war. “Mother, it is awful to see the sad things that have happened. In some cases there are only pieces of men left. One young chap, twenty-one years old, has lost both legs. At first he did not want to live, but now he is beginning to take an interest in things and is being fitted for wooden legs.”

“I must tell you about the wonderful dog that is at the American Ambulance. His master came from Algeria, and of course did not expect to take his dog with him, but when the ship left the wharf the dog jumped into the sea and swam after it, so they put off a boat and hauled him on board, and he has been with his master all through the war. He was in the trenches with him, and one day a German shell burst in the trench and killed all of his companions and buried this man in the mud and dirt as well as injuring him terribly. Strange to say the dog was not hurt at all, and the first thing the man remembered was the dog digging the mud off his face. As soon as he realized his master was alive, he ran off for help, and when they were brought into the Ambulance together there were not many dry eyes about.”

“The French papers are full of the heroism of the Canadian troops; they have done wonderful work at Ypres, but at what a terrible cost.”

“I feel so proud every time I see the dressing gowns the DeMonts Chapter (I.OD.E.) sent me - they are the nicest we have.”

On July 4, 1915. “I have such mixed feelings when I hear that the troops have left St. John. My heart aches for those left behind, but I am so glad to know they are on the way, for they are needed badly and they will get a royal welcome, for Canadians have proved their worth.”

“I think it was the sweetest thing of little Mary Murray to send me her birthday money for my soldiers. I have been getting them fruit and cigarettes for Sunday. That is the thing that overwhelms me at times - the awful suffering every way one turns.”

April 8, 1916.  “It touches me to tears to think of the way the St. John people have helped me. I wish they could have a look in here and see how much more I have been able to do on account of the help they have sent me.”

“To say that I was delighted will not express my feelings when I got the letter from the Loyalist Chapter, I. O. D. E., enclosing cheque. It was awful good of them to help us here, for I realize the demands for help on every side and it is only natural that they should send to the Canadians first. But O! it is so badly needed and will so do much good here. I had been racking my brain trying to think of a way to scratch up a few pennies, and then this delightful surprise came.”

She received several honours from the French government for her work overseas: The Médaille d'Honneur, Médaille des Épidémies and the Croix de Guerre.

Agnes returned to Saint John at the end of World War One after spending some time renewing her health as a guest of the Eldridge family in New York.

As her heath failed, she sought medical attention from the Presbyterian Hospital, New York, where she passed away on April 23, 1926.

Her residence was given as 11 Pagan Place, Saint John. The funeral was held at Trinity Church and she was buried in Fernhill Cemetery.

As one reads the letters Agnes Warner wrote, telling of the injuries, the suffering, the loss of limbs and eyesight, and the failure of nursing care to save a seriously wounded patient, it is difficult to keep back the tears not only for the boys and the nursing sisters but for the generosity of so many people in Saint John.

Although years have passed since the war ended, New Brunswickers still remember on November eleventh the sacrifices made by so many.