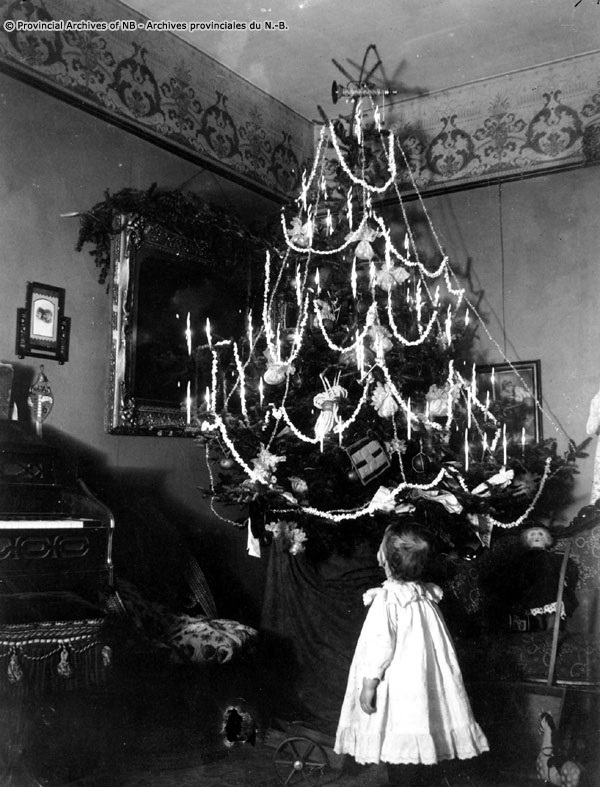 
As we drove up Gramp’s driveway, I noticed the lights were on in the double parlour, which meant Aunt Sadie was probably getting everything ready for Christmas. I loved this great big room with the sliding door and its own little parlour stove with isinglass windows. The old furniture included a love seat filled with horse hair that belonged to my Great Grandparents. The framed photos of long gone relatives watched from their places on the wall. Even Queen Victoria had a place of honour.

Aunt Sadie had the tree up and partially trimmed but needed Dad to climb the step ladder to place the star on the top of the tree.

Once this was done, the grown-ups sat and talked about everyday topics.

I just didn’t understand those adults. It was only four more days until Christmas and they did not seem one bit excited.

I had seen a catalogue in the hall so I brought it in and I sat on the foot stool in front of the stove,  slowly turning the pages.

For weeks I had my eyes glued to the fountain pen with the 14k gold point nib that you could either write with a large line or turn it over and have a fine line. It had a gold-filled crown and an ink view window. It was a real beauty. I hoped Santa Claus had one in his work shop.

Cliff was not saying much but I knew he was hoping for a six seater varnished toboggan, made of white birch with hickory runners and a padded seat.

Mum and Gram thought we were not listening as Mum said “Time is getting short and the final order from Eaton’s with two important Santa Claus gifts for those two kids has not arrived.”

Gram whispered, “Don’t worry, Dave is going to town on Monday and I am certain Duval’s or MRA’s will have the two items you need.”

That statement was really weird. Why would the ladies be concerned about where Santa Claus bought our presents?

Gram looked over and saw me listening and realized that little pitchers have big ears so she immediately started to tell us a story, “One Christmas, Gordon wanted a harness and a leash for the little bulldog, called Tiny. Although your Father searched all over town on Christmas Eve Day, he came home empty handed. The lack of this gift ruined Gordon’s Christmas. He spent the day looking very sad with tears close to flowing.”

Next came a tale about Dad.  Gram said. “Your Father was probably nine years old, when he had his heart set on a special Crokinole Board that had the games of parcheesi, checkers, snake and ladders on the reverse side.”

Before she had a chance to continue, Dad quickly spoke up and looked at us, “The Crokinole Board you are using is mine. If you look in the corner, you will find my initials that I carved there with the jackknife I also received that year.”

Time has changed many things about Christmas gifts. For one thing, I no longer carefully remove the wrapping paper and smooth it out and fold it to be reused next year.

Probably our parents and grandparents too, saw the changes in gift giving. In most cases their presents were home crafted. Usually a gift was something that was needed.

This week as I browsed through my reproduction copy of a 1897 Sears Roebuck catalogue, I turned back the clock to pick out the gifts that might have been suitable for my grandparents at that time period.

Since Gram would have been a young single girl, I chose a white chemisette for her that cost 23 cents, along with a lace pin. I was certain her four younger sisters would like the $1.45 Kilt Suits. I picked matching navy blue ones for the twins, Ada and Tillie.

The front wheel rubber tired Veloclpede would be too small for her older brother but the man’s size bike cost $30.00 so I would need to do some more looking.

Gramp always liked to be dressed up to go to church. In the 1890s, as a young man, he probably wore a double breasted box style Mackintosh Coat with a velvet collar. The embroidered Pique Teck Scarf elaborately embroidered in silk that cost 25 cents and a 65 cent pair of overgaiters caught my eye as a gift for him.

For the family researcher, identifying the time frame of a photo is often a puzzle but a look through the clothing in catalogues, can often be helpful.

Many a button box or jewellery case will hold pins or rings with an emblem on them. In 1897 and other years, one could purchase Epworth League, Christian Endeavor Society, A. O. U. W. which may have been Ancient Order of United Workers, Masonic, Odd Fellows and other fraternal pins through the mail.

http://www.collectionscanada.gc.ca/cmc/index-e.html - The Virtual Museum of Canada - A History of Canadian Mail Order Catalogues 1880 to 1970 and The Vintage Christmas catalogue archive project at http://www.wishbookweb.com are real eyeopeners to Christmases past, the gifts that may have been received, the changing styles in dress as well as the everyday necessities of daily life that needed to be purchased.

During the Christmas season, take time to reflect on the personal life of ancestors, their trials and tribulations and the sadness of the empty chair. Yet happiness reigned, with the singing of Christmas Carols, the excitement of children, the gathering of family for the Christmas dinner and the greeting of “Merry Christmas”.

**
Query 1877
Whelpley - Pangbourne: Capt. David C. Whelpley, born 26 Dec 1831/33, married Harriet Pangbourne in Saint John 28 Jul 1851. Interested in finding his parents and/or articles on death. I know he was a sea captain in Lepreau 1871 and 1881 and had family in Mascarene. He was Lost at Sea in Feb of 1883.
Contact Laura Thomas by email at Thomas.team@verizon.net

Query 1878
Gardner - Thompson - Austin: Fred Gardner came to New Brunswick circa 1926 - possibly a Norwegian seaman who changed his name. Ivy Thompson, came to New Brunswick from England with her family circa 1920. Her family returned to England after three years, but Ivy stayed in New Brunswick with the Harry Austin family. Ivy and Fred had a son born in 1928 in Minto. If anyone has any information to aid me in my search, I’d really appreciate it.
Diane Richter - email di@allcareautosolutions.ca