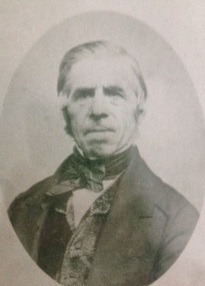 No matter what I was called, I was going to continue looking into trunks, chocolate boxes of clippings, the dresser drawers and the top shelves of cupboards. I even made exciting discoveries in the button box. It was also fun to look through the old wooden tool boxes.

I had no intention of taking anything except knowledge. Some things really confused me, such as a letter with a red three cent stamp with a picture of a man with a beard and moustache. Neither could I understand an old brown coin that said “half penny New Brunswick”.

Gram’s big old house was a treasure trove. I loved to slip upstairs and take the back stairs to the attic but today I chose the room over the kitchen to be my hunting ground.

An orange crate dressed to look like a bedside table only held a bunch of embroidery thread, needles, stencils and a partially finished bureau scarf which did not interest me.

Next I spied an old jelly cupboard which I had tried to open once before but its doors seemed to be jammed. I gave a really big pull and much to my surprise, the handle came off in my hand, the cupboard tipped over. I landed on the floor, with the cupboard on top of me along with a whole bunch of books with the title “Minutes and Proceedings of the Municipal Council of Kings County” that covered me from head to toe.

Aunt Sadie heard the crash and came running up the stairs. Before she even asked if I was hurt, she started questioning me, "Why in heaven’s name would you pull over that cupboard?" Then of course she added, “What do you expect to find when you are snooping though things that don’t belong to you?”

There was a closet in Charlotte County in the home of Major Jimmie Brown that was off limits to all for seventy years, until his great-granddaughter opened it for Lilian Maxwell in her preparation to compile ‘How New Brunswick Grew’.

The only personal article in the closet was the sheath of Mr. Brown’s sword, which he carried as colonel of the Charlotte County Militia.

James Brown, the eleventh reached St. Andrews from Forfarshire in 1810 at the age of nineteen, bought a farm, built a cottage and opened a school at Tower Hill, Parish of St. David, Charlotte County, New Brunswick.

He married twice and each time built and adjoined a cottage at right angles to the first.

Family lore says he marched through the 14 rooms of his house to the skirl of his bagpipes to awaken his 14 children.

He served for 34 years in the New Brunswick Legislature and was known to go on snow shoes to Fredericton.

At one time he was the Surveyor General.

In his closet there were Journals of the House and Sessional papers, bundles of letters and stacks of pamphlets and reports; letters from his children giving news of the home farm at Tower Hill; a letter dated 1841 from an old friend in Glamis, Scotland; various letters dealing with the schools of the 1840’s when Brown was a school inspector; an 1845 letter from the feudal Owens of Campobello; and an 1863 letter from his grandson W. H. Thompson from Liverpool.

His own diary beginning April 1838 and ending 1841, describes being the Supervisor of the Great Road from Fredericton to St. Andrews and faithfully records details of country travelled, work done and money paid out, giving minute details that are gold nuggets to the family researcher.

The many pamphlets on agriculture tell much about farming and regulations as to the formation of the Agricultural and Horticulture Society.

Interesting to find that Messrs Snow in Kings County had the only factory which manufactured woolen cloth.

Other pamphlets dealt with the Mechanic Institute, North Shore Fisheries, the Fisheries of the Bay of Fundy etc.

The Education chapter and the1845 pamphlet were very interesting, mentioning in 1790 B. S. Williams a retired naval clerk opened a school in Fredericton. In 1788 6,000 acres of land surrounding Fredericton was set aside for a “College of Learning”. A listing is given of the schools in Saint John in 1873.

And I might add the list of pamphlets goes on - covering the penitentiary, asylum, militia, postal service, light houses, immigration and more.

In 1862 James Brown travelled through the British isles lecturing about immigration to New Brunswick.

I could talk all day on the James Brown “treasure” but you can read these documents on the Provincial Archives of New Brunswick website at http://archives.gnb.ca/Irish/Databases/Letters/FindingAidViewer.aspx?culture=en-CA&fa=MC295. They are filed under MC295: JAMES BROWN PAPERS. Dates of creation: 1813-1870.

If you have an interest in James Brown, you can read his biography at http://www.biographi.ca/en/bio/brown_james_1790_1870_9E.html.