The Envy of the American States

The Loyalist Dream for New Brunswick by Ann Gorman Condon 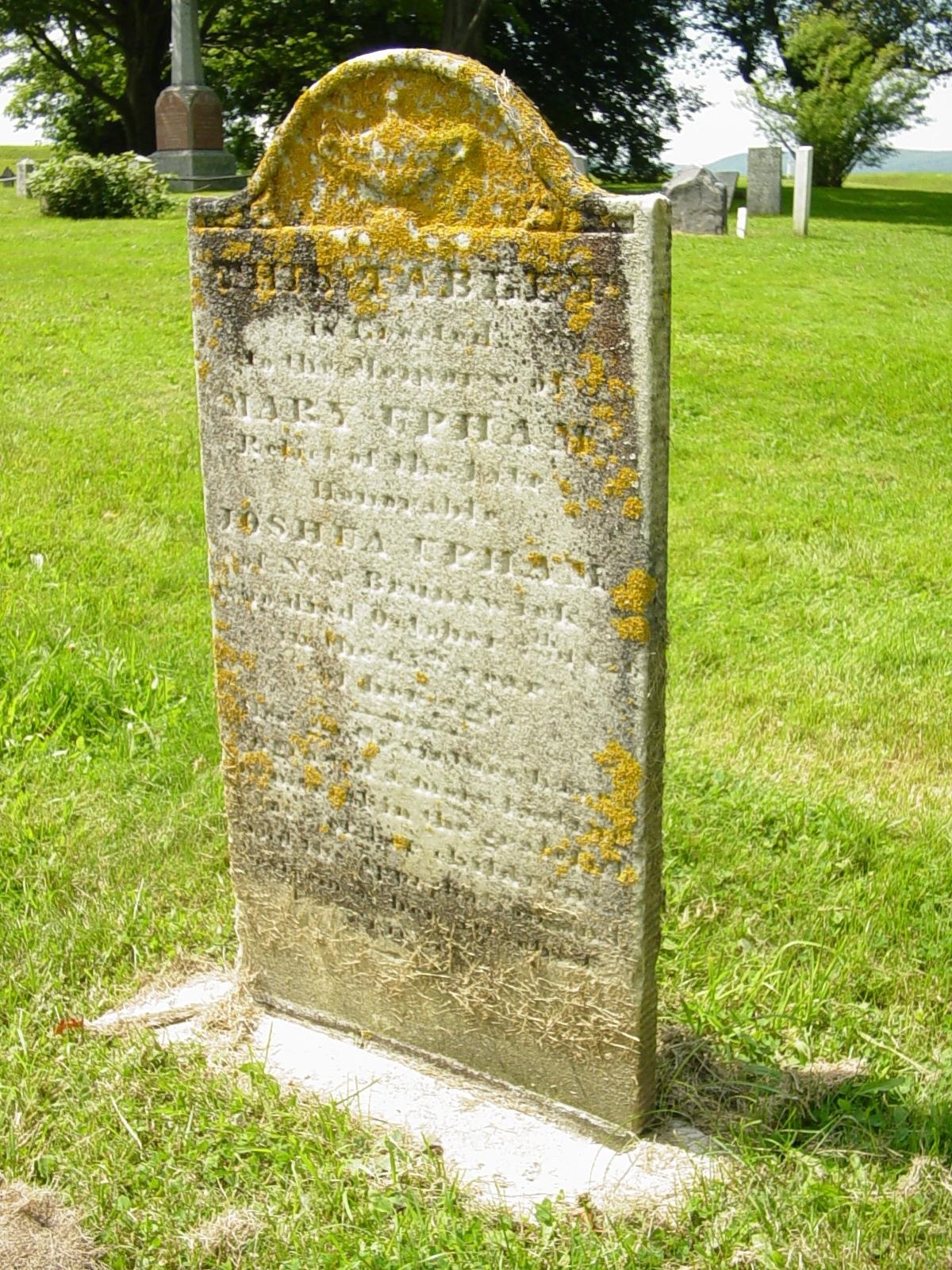 A tombstone for Mary (Chandler) Upham, relict of the late Hon. Joshua Upham of New Brunswick,
is located in the Garrison Cemetery, Annapolis Royal, Nova Scotia.

Our little one room school house did not have a mailbox. Civic numbers had not been heard of when I was a kid. But the mailman knew where to deliver the box from the Lady La Tour Chapter of the I.O.D.E. that held several books.

I could not understand the teacher placing the parcel on her desk and keeping right on teaching Social Studies. All I wanted to do was to take a look and see what great reading material had been given to us.

My concentration level dropped to zero. I drifted off into the land of day dreams and saw a room in my home of the future, which was filled with shelves that held hundreds and hundreds of books.

I loved New Brunswick history so these books would all be on that topic.

Suddenly I was taken from this wonderful room by the snapping of the teacher’s fingers. I felt all eyes on me as she repeated her question, “What date did the Loyalists land in Saint John?”

Those Loyalists had a dream, not of a room filled with reading material, but of a new British Colony here in our New Brunswick that would be the envy of the American States that they had left behind.

In 1984, Ann Gorman Condon compiled, “The Envy of the American States - The Loyalist Dream for New Brunswick” in which she traces the lives of the twenty most prominent Loyalist leaders of New Brunswick.

She lets us walk beside men, born in America,  who thought alike with a common goal and determination to preserve the empire and liberty in North America. Men such as Ward Chipman, Edward Winslow, Jonathan Odell, Gabriel and George Ludlow, John Saunders, Jonathan Sewell and many others are in this group.

Edward Winslow could take his American heritage back to the landing of the Mayflower in 1620.

The great-grandfather of John Saunders was a large landowner in Virginia and a minister of the Church of England.

The only Yale graduate among the New Brunswick leaders was Amos Botsford. In 1776, he had an elegant house with his wife being Sarah, a daughter of Joshua Chandler.

Jonathan Odell probably received the best education.  He was a surgeon with the British Army in the West Indies and then studied in England for the ministry. Poetry writing was another of his talents.

Abijah Willard fought under Governor Shirley at the siege of Fort Beausejour in 1755.

Joshua Upham set up practice in Worcester County after Harvard. He also married into the wealthy Colonel John Murray family. Before trouble arrived, he built a two-story factory for the manufacture of wool.

The years rolled by and much hardship was endured by all, regardless of their social or financial status.

The Loyalists clung to establishing cultural institutions for their children to attend and to maintain a dignified style of life. It could be said that at great personal cost, their prime aim was to give their children what they had in their youth, even to suggesting suitable marriages.

Reading  “The Envy of the American States - The Loyalist Dream for New Brunswick” lets us walk in the shadow of those who had a dream, yet gives us a better understanding of resentments and tensions in public life that were created among New Brunswickers.

By the way, the wives of the Loyalists sometimes found themselves and their family in dire straits which can be seen by reading the three thousand digitized documents concerning “Records of Old Revolutionary Soldiers and Their Widows ” that are available on the website of the Provincial Archives of New Brunswick with approximately 250 named widows.

Judge Joshua Upham went off to England on business, took ill and died there, leaving his second wife, the widow Mary Chandler Upham, to care for the family.

Her son Charles Wentworth Upham was born in New Brunswick and was a young boy when his father died. He later went to the United States. He married Ann Susan Holmes, the sister of Dr. Oliver Wendell Holmes. Charles became the President of the Massachusetts State Senate, the 7th Mayor of Salem, twice a member of the Massachusetts State House of Representatives and did detailed research on Salem Witchcraft.

For several years, the school children in the City of Saint John had a holiday on May 18 in recognition of the landing of the Loyalists in 1783. Celebrations have been held over the years to mark this anniversary.

“Loyalist Souvenir - One Hundred and Fiftieth Anniversary of the Landing of the Loyalists in the Province of NewBrunswick 1783 - 1933", published by New Brunswick Historical Society in 1933 gives much information.

The Hundredth Anniversary of 1883 began with a watch night service in the Centenary Church with a salute being fired at midnight on King Street East. In the morning the Polymorphian Club marched from Haymarket Square to meet the Loyalists on landing. There were thousands of spectators on hand.

On May 18, 2014, the annual 21 gun salute to commemorate the 229th anniversary of the landing of the Loyalists could be heard throughout Saint John.