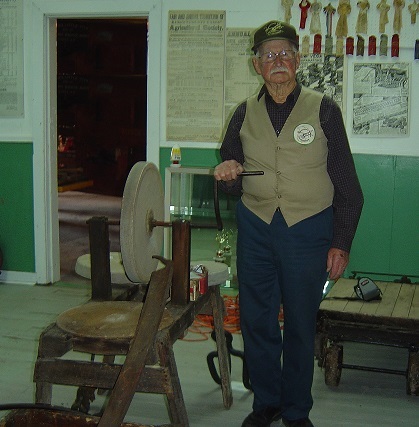 Tom Anderson donated his grindstone that had always been kept in the barn
to the Agricultural Museum in Sussex. Tom remembers well the hours he spent over the years turning the handle of his father's grindstone

Friday morning meant only one day of school left this week and then Saturday to do whatever we wanted to do.

Dad didn’t seem excited about this being Friday. He sat at the table looking very tired and grumbled about not being able to sleep.

I whispered to Cliff, “Dad was probably lying awake thinking up a make work project for us on Saturday.”

No sooner had the words passed my lips when he said, “Since it is going to rain tomorrow, I am going to need the two of you to help at the grindstone.”

On Saturday morning, we groaned as Gramp arrived with his scythes and cutter bars that also needed to be sharpened for the haying season.

I think doing grindstone duty was one of the most boring jobs a kid could be asked to do. I had to stand still and let the water from a can dribble over the wheel to keep the metal cool. Cliff had the labour part as he turned the crank with sweat running down his brow. Dad sat on an old milking stool, carefully running the scythe blade up and down on the grindstone, working on the underside of the blade to produce an upward-cutting edge. Later a final touch would be given with the whetstone.

Gramp started to talk to break the monotony and told us grindstones were cut back in 1840s at the ledges of Sandstone at Cape Maranguin. One man could make about four hundred stones in a season. They were usually two feet in diameter and four inches thick but different weights and sizes were cut.

The grindstone trade was also pursued on Grindstone Island and that is how the island got its name.

It has been many years since I listened to Gramp’s story. Today from the internet, I have found out Grindstone Island was owned by Saint Ann’s Church in Sackville. Furthermore in 1858 an Act was passed that they lease or sell enough land for the building of a light house.

He kept a diary, as did other Keepers, with many everyday events recorded.

At http://www.rootsweb.ancestry.com/~nbpstgeo/stge5lighthousekeeper2.htm is the reminiscences of Prescott Dines, of St. Andrews, a retired keeper of the Green's Point light which guided vessels through L'Etete passage through long years of service.

Lots of details on Fundy’s Cape Enrage at http://www.capeenrage.ca/images/cape/forms-and-documents/lighthouse_history.pdf which was constructed in 1840 with lamp oils and wicks.

If you have access to the New Brunswick Legislative Assembly Journals at your library, you will find yearly information on lighthouses.

Today lighthouses are becoming almost as scarce as hen’s teeth but with a bit of research, lots of information can be found that will bring back many stories of the past.


Many a barn still holds a grindstone or two as a way of sharpening tools
or just being kept as a memory.