A Miscellany of Book Titles 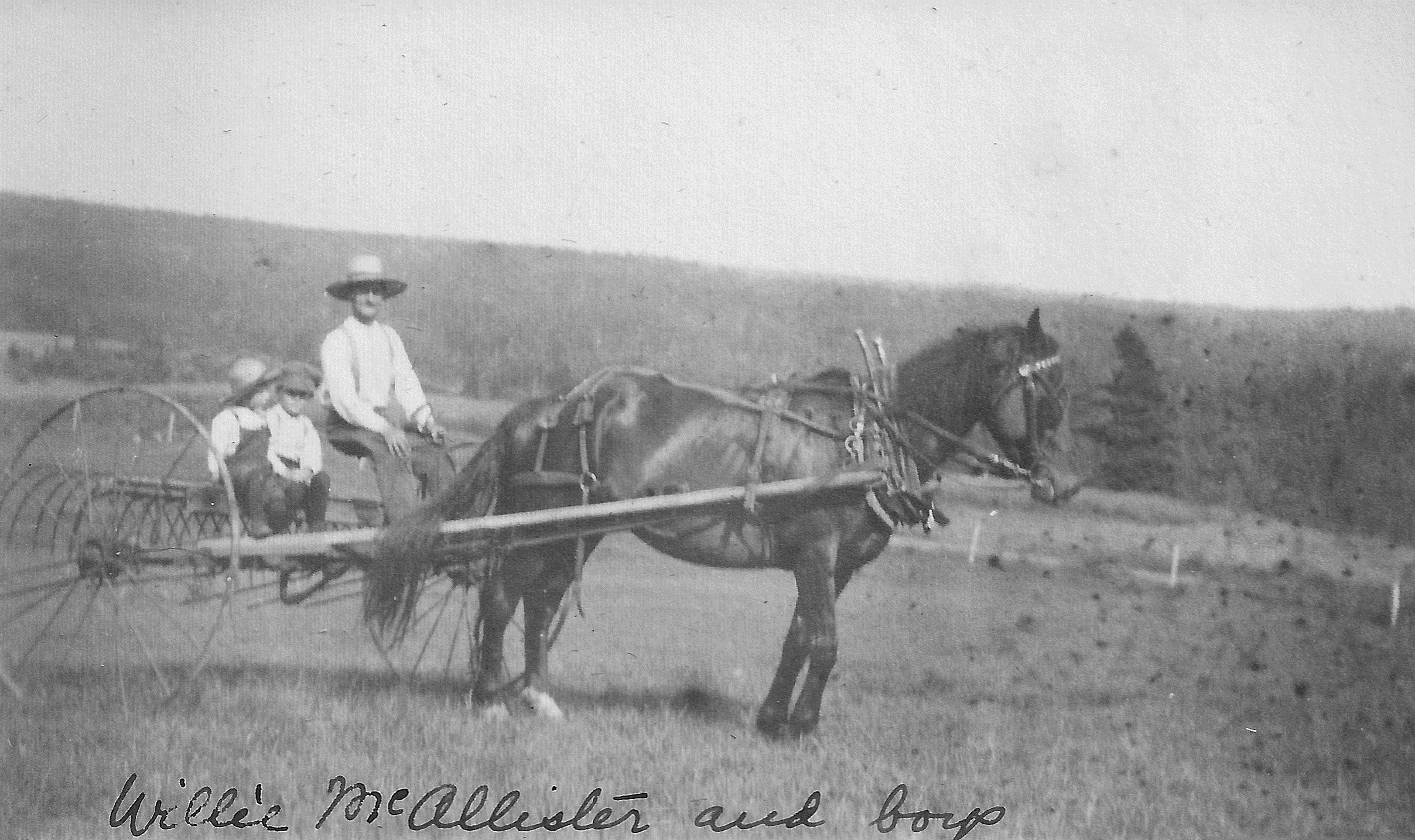 Willie McAllister with boys on a horse drawn hay rake


The way Gram was going on, you would think Gramp was going to die of thirst while he was mowing the field along the brook on this very hot summer day.

Cliff and I put the glass gallon jug that was filled to the brim with an oatmeal drink, a wooden stirring spoon and a tin cup wrapped in brown paper in the pail that we would use to get the horses a drink.

Gram gave her usual warning to not go near the sickle mowing machine with its six-foot cutting bar while the horses were moving.

Once we reached the brook, we filled the pail with water and sat down under some bushes to wait as Gramp was at the far end of the meadow.

As he was just about to us, he stopped the horses and got off the mower and seemed to be looking at something small in the grass. Then he beckoned for us to come to him.

To our surprise we saw a turtle.

Since this was our first close up look at one, we had lots of questions.

Gramp thought it was probably a Wood Turtle that hung around brooks. If it were taken away, it would find its way back as it had great homing skills.

Since they don’t start a family until they are about ten years old, he was careful to give the turtles a chance to reach maturity.

When I asked if I could put it in the pail and take it home, I received quite a lecture about letting this turtle live in its own habitat.

We watched as it slowly made its way across the field, safe from the cutter bar of the mower.

Gramp grumbled, he had wasted enough time teaching us a miscellany of things and needed to get back to mowing.

I asked Cliff, “Is a miscellany a kind of a reptile?” He just shrugged his shoulders.

Looking at a bookshelf, one can see a miscellany of topics to read about. In fact one book I found had a very interesting title - “A Maritimer’s Miscellany” fascinating Facts About Nova Scotia, New Brunswick and Prince Edward Island. I was interested in finding out that in 2006, Shirley Cameron of Sherbrooke, Nova Scotia donated a thirty-nine hectare section of watershed land along the St. Mary’s River to the Nova Scotia Nature Trust as home to wood turtles.

Canadian Blood, American Soil - The story of Canada's contribution to the American Civil War by Jim Cougle tells of the approximately 50,000 Canadian men (400 women) who served in the ACW, their reasons for enlisting, and a discussion of public opinion concerning the war. In accordance with British foreign policy regarding the war, Canada was officially neutral. However, this did not prevent individual Canadians from supporting one side or the other.

Aurora Borealis - A History of the Reformed Presbyterian Church in Canada (Covenanter) 1820 - 1967 by Robert M. More, Jr. was compiled October 7, 1967. It lists the 106 congregations, mission stations, and resident groups. It contains very detailed information on the Covenanter History and the entire movement in Canada, such as Mr. Clarke's first sermon in Shemoque was delivered in the barn of William Anderson in 1828. Rev. James Reid Lawson was born May 23, 1820 in Rathfriland, Ireland.

There are only 8 pages in the 1967 booklet, The Dorchester Keillors by Lloyd A. Machum with those pages being filled with genealogical information.

Central Blissville - A Brief Historical Sketch compiled by Herbert Richardson in 1984 is a real find for the person researching this area as it is filled with lots of names and descriptions and ownership of buildings and property. It includes a Train Tragedy as told by Stephen Shaw a Brakeman on that train in 1885.

The Battle of the Restigouche. The Last Naval Engagement between France and Britain for the Possession of Canada has a copy of the letter from the Captain, the Hon John Byron, R.N., on board  H. M. S. Bay of Chaleurs, 11 July, 1760

Wilsons of Upper Miramichi  - Descendants of John Wilson of Scotland by James R Wilson (1994). The story of John Wilson, who settled on the Miramichi River in New Brunswick around 1800, and his descendants. Narrated by descendant James R. Wilson, an internationally-known harpsichordist and professor emeritus of Rutgers University.

A search online of the catalogue of the New Brunswick Public Library Service using New Brunswick Genealogy in the subject box at  http://vision.bibliocommons.com/ gave me more than 900 titles of books.

Some books about New Brunswick are big and thick while others are very small. They cover many topics but all hold pages filled with fascinating information for the researcher.

Query 1886
Symes - Brown - Brooks: Robert Symes came to Australia, and his brother James Grant Symes travelled to Kent Co., New Brunswick, Canada – the remaining siblings remained in Scotland. I would like to make contact with the compiler of  "Symes & Brown: A little of the past" who lives in Saint John, as her publication may give me more information on my Canadian relatives. Any information on the Symes family of Kent County, NB would be appreciated.
Contact Penelope Symes, Australia by email s.smart@iinet.net.au

Query 1887
Kitchen - Estey: Can anyone give me the exact location in Jacksontown, New Brunswick of the Henry and William Spurr Kitchen farms, as well as the one of William Beverley Estey?
Contact larry.smith001@comcast.net