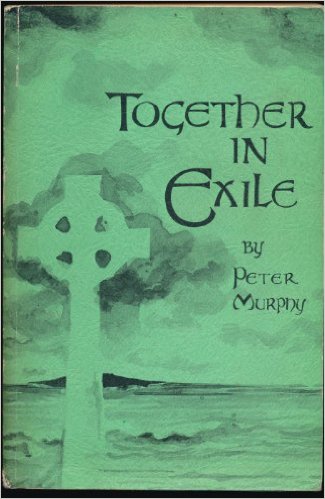 Together In Exile by Peter D. Murphy

“Together in Exile” traces  a group of Irish emigrants from County Louth who settled in Lower Cove (South End of) Saint John, New Brunswick, Canada in the 19th century.

A product of eleven years of research in Canada, the United States and Ireland by Peter Murphy.  It is a highly praised genealogical work.

Now out-of-print and hard to find and much sought after.

Book 8814 T   Together In Exile by Peter D. Murphy  $ 135.00 Canadian Curency plus $12.00 shipping and handling within North America- soft cover - almost as new condition
Very very scarce and hard to find book.   Much Sought After!

Payment is accepted by credit card online through PayPal at https://www.paypal.com/  (my account rmcusack@nbnet.nb.ca) or electronic money transfer.   Contact  Ruby  for more information

Front of store of Peter Sharkey

P. Fred Fuller and wife Annie, the daughter of Peter Murphy of Cooley

Tombstone of John Hanlon who died 1850

* * * Appendix “A” - A List of vessels out of Port of Newry, County Down carrying passengers to the Port of Saint John, New Brunswick (1819-1848) based on the shipping column of the New Brunswick Courier.

Very very scarce and hard to find book.   Much Sought After!

More information on the book at http://www.rubycusack.com/issue10.html

From Ireland to Saint John

Together in Exile traces County Louth, Ireland emigrants
to Lower Cove, Saint John, New Brunswick, Canada
Where in Saint John is Lower Cove? Who were the "Coolies?" Why did such a large group of Carlingford natives settle together in the Port City? And who were they?

Curious? Then flip open "Together in Exile," by Saint John writer Peter Murphy. You'll find the answers to these questions, plus page after page of genealogical information tracing the County Louth emigrants and their descendants to Lower Cove, Saint John. The County Louth settlement had its beginnings in the early 1820s.

"Together In Exile" is a comprehensive text, and it's no wonder. Mr. Murphy spent 11 years researching here in Canada, as well as in Ireland and the U.S. before compiling the book in 1990.

In his genealogy of families, Mr. Murphy includes information from baptismal records and marriage records. You will also find out where these people lived, how they made a living and, finally, how they died. Every fact is documented with a reference.

Mr. Murphy has researched many families of Saint John. He has more information stored in the memory bank of his brain than most of us will enter into our computers. Lucky for us, Mr. Murphy has the trait of a true genealogist - he is continuously sharing his knowledge and expertise with others.